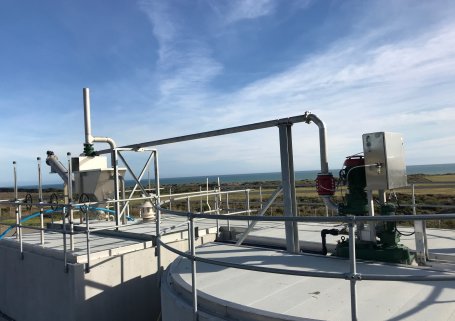 Smith & Loveless recommends a preventative maintenance provision to drain your PISTA® Grit Chamber once a year for inspection of the wetted items. Just like our pump stations, Smith & Loveless works to make everything easily accessible for the operator and technicians. Once drained, the floor of the chamber will have grit that has not made it to the grit hopper. Remember “you have essentially frozen a moment in time”.

Examine the pattern of grit on the floor. The goal is to show a longer grit path (even grit distribution) within the flow pattern process, which increases the amount of grit being captured on the chamber’s patented flat floor. If you have experienced a lot of low flow conditions because of changes in flow distribution, you may see a shortened grit path. This can be determined by a large amount of grit built up near the inlet channel. If so, the patented PISTA® V-FORCE BAFFLE™ may be just the ticket. This design provides many engineering benefits and cost saving considerations. During periods of low flow, the patented PISTA®  V-FORCE BAFFLE™ extends the grit extraction path within the vortexing PISTA® Grit Chamber and increases the amount of grit being captured on the chamber’s flat floor and then swept across the floor with the PISTA® Axial Flow Propellers and into the grit hopper.

While you’re reviewing the grit pattern, you will also want to inspect the straightening vane and hardware located below the exit channel shelf. If corrosion is present, the straightening vane can be replaced or converted to stainless. Also make sure the hopper plates are in place and in good condition.  These should be recessed to allow a smooth transition of grit to the PISTA® Grit Storage Hopper. If there is debris present under the hopper plates, remove it to make sure the forced vortex flow pattern is not disrupted. Remember, this exclusive and patented design minimizes organic capture, while hydraulically directing grit into the lower grit storage hopper and organics upward and out of the PISTA® Grit Chamber.

The PISTA® V-FORCE BAFFLE™ permits design flexibility so water elevations can be controlled. Controlling water elevations is important because it upholds the proper water velocities in the inlet channel to the PISTA® Grit Chamber. The bottom line – you can adjust for all flow conditions to maintain the correct inlet channel velocities with the new PISTA® V-FORCE BAFFLE™.